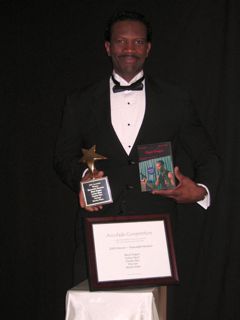 "All I want to do is deliver a new type of diverse action film from an urban point of view."


The Accolade Competition was created to honor and give recognition to outstanding craft and creativity in film, video, television and commercials. Entries are judged by highly qualified professionals in the film and television industry. Information about the Accolade and a list of recent winners can be found at http://www.accoladecompetition.org

In winning an Accolade, Movbu Films LLC joins the ranks of other high-profile winners of this most sought-after award. Thomas Baker, Ph.D., Competition Chairperson, had this to say about this year’s competition, “The judges are pleased with the exceptionally high quality of entries in the Accolade Competition. The winners of this coveted award are truly the best in their industry. The Accolade sets the standard for creativity and craft.”

Charley Rice Has Been Chosen For Hollywood or Hollywouldn't Show, As Their First Diverse Guest!

Independent filmmaker Charley Rice has announced that his film titled "Black Dragon" will be featured at Hollywood, California. The film is inspiring, and the actor, producer, and director have illustrated his firm belief in the movie.

Moreover, this film is produced outside of the major film studio system and the passionate writer, producer, and actor is welcoming good people all around to be part of this team in other to make something better from this nugget.

Click on the link to support the Superhero project

According to the filmmaker, the film will become a new symbol of hope for all kids, and he will be happy to leave such legacy which will inspire the present and coming generations.

Would you like to help me green light this project?
All you have to do is to email your votes to this show so I can make the film or donate to the Gofundme page above...

To find out more and to vote "Charley Rice" for Hollywood, please watch this amazing video: on Hollywood or Hollywouldn't

You are the only thing missing from the equation!

Charley has mentored with some of the well known Celebrities.